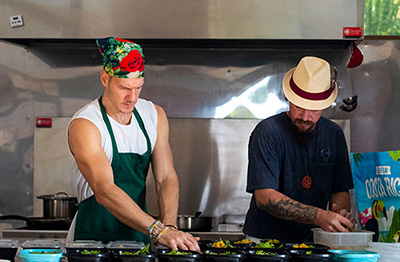 Jesse grew up in the small town community of Walkerton, Ontario only two doors down from Dan.  Attending the same elementary school together and eventually the same college in London, Ontario.

Without even realizing it, his culinary career began at a very young age in his Grandfather’s kitchen baking homemade bread and discovering how putting time and love into his food can make all the difference in the flavour. It wasn’t until he was in college that he was offered a job by his cousin to work in the kitchen of a large restaurant chain.  Thus began his path into the culinary world.  Starting as a dishwasher/prep cook then eventually a line cook and kitchen supervisor.  After graduating college he remained at the restaurant while still searching for a job as a graphic designer in the advertising & print industry.  Continuously unsuccessful in his endeavour he remained a line cook for almost 7 years still utilizing his graphic design skills by working on small projects for various clients in the city.

Then in 2006 he had a new opportunity at high-end family owned Italian restaurant where local ingredients were sourced and 80% of the products were made in house from scratch. Thriving on new inspiration, Jesse quickly worked his way up to a supervisor role, running the kitchen as well as helping to create feature menu items for the next 5 years.  During the same time he was still pursuing his Graphic Design career by starting a small business working from home for multiple clients as well as building a new online business.

Realizing he wanted to focus further on his creative passion for design, he later left the culinary world to work on his business. After 5 years apart, he returned to the kitchen after discovering that food and nutrition needed to be a constant in his life. During this time he also worked with Dan helping to build his brand and website for his previous retreat center in Peru. Very curious about taking a trip to Puru to experience it first hand, in 2017 he traveled down to work with the plant medicine ayahuasca as well as Kambo.  This opened up new inspiration and flooded him with new creative passion yet again.  When Dan and Melissa began Soltara Healing Center they turned to Jesse to help build the website.  With a strong calling to visit Soltara as soon as he could, he never imagined he would be working there.  So when the opportunity presented itself in August of 2018, Jesse immediately dropped everything and packed his bags, knowing this was an opportunity he did not want to pass up.

Since then he has been collaborating with the kitchen manager and retreat director to create ayahuasca-dieta friendly menu options that are healthy, nourishing and have lots of flavour while limiting salts, fats, sugars and particular foods that can be hard on the stomach & mind while working with the medicine.  Luckily his experience with Italian cooking had prepared him with the knowledge of working with many different fruits, vegetables and plant based proteins, creating delicious meals with simple ingredients that are full of flavour and love.

Back to Team Page

Help us co-create a community that fosters open dialogue, personal connection, and high-quality resources. Learn from each other, expand your knowledge base, and share the healing process.